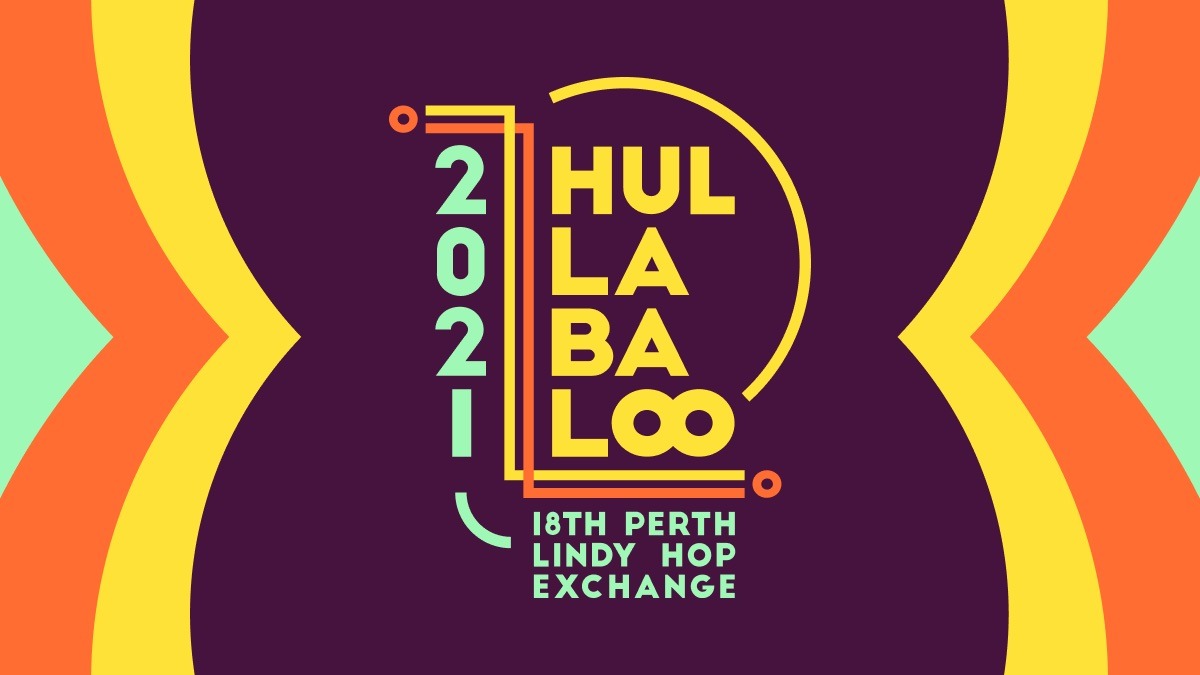 Social dancing is back!

Posted Sunday 4 October 2020 by Perth Swing Dance Society in Announcements
Social Dancing is BACK! While most people in WA are feeling pretty chuffed that we are returning to a more ‘normal life’, please be mindful when you head back social dancing to help support venues, musicians, fellow dancers, yourself and the general public. Here are some tips when you decide to head out again… after all, we should be doing these all the time: 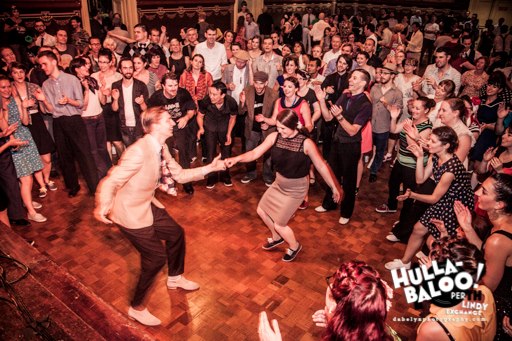 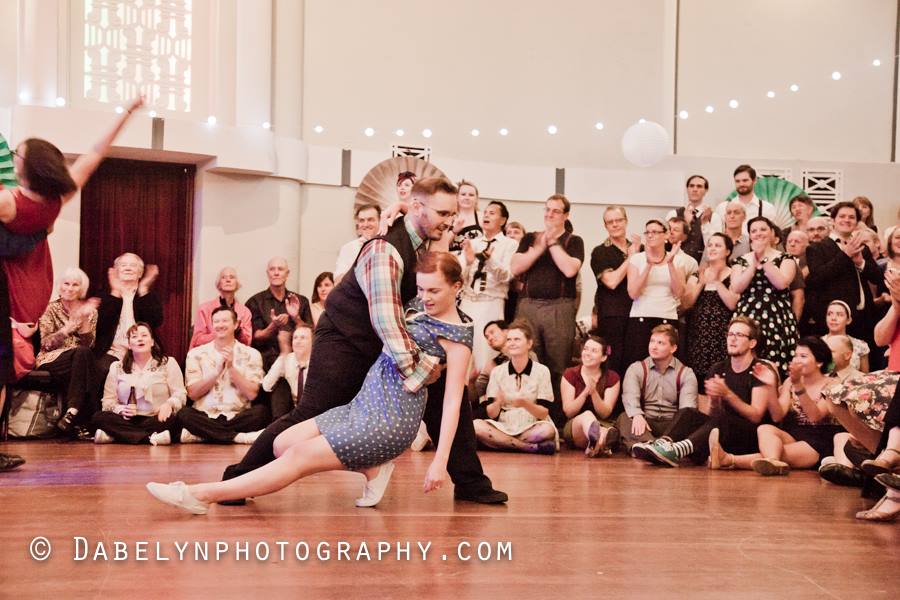 Sadly, due to the Covid-19 outbreak all upcoming events have been removed from the PSDS online calendar for the time being.

We want to ensure that our community is safe and that our actions support the efforts to flatten the curve and overcome this Covid-19 pandemic.

While regular classes, swing dancing events and activities are on hold for now, we hope to keep our community connected, even during times of social distancing. Keep in touch with others in the Perth swing dance community via our Facebook page and through the pages of the schools you attend. You can also support swing schools by attending their classes online.

Please continue to support the community and one other. Stay safe and In times like these, we need to be patient and kind. This includes being kind to yourself. 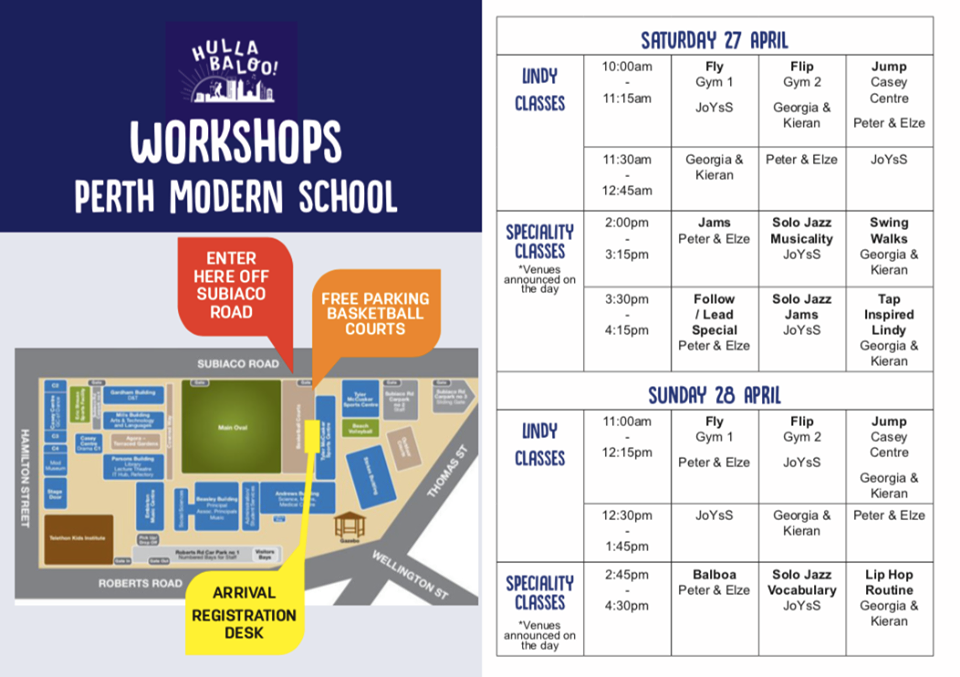 Call out for Expressions of Interest for the 2019 Hullabaloo Committee 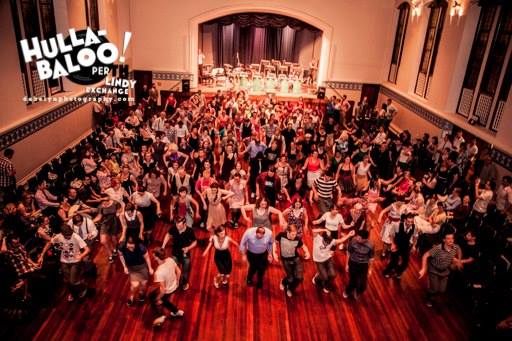 Hullabaloo is looking for 5 people to complete our committee and take on some very important roles as part of the festival. If you have an interest in being part of the organisational team and feel you can bring energy and initiative to the 2019 Hullabaloo festival in any of these 5 positions please email Crystle at challingercrystle@gmail.com indicating which position you would be interested in and any skills/prior experience you can bring to the role.

Looking for someone who is organised, confident, outgoing and wants to really take control of the working cogs of Hullabaloo. Position will involve overseeing the Hulla working team; will be the point person throughout the festival. You will work closely with the Hulla coordinators coming up to the event and be in charge of final decisions during the festival weekend. Qualities required: fair and unbiased, able to delegate and show initiative. This is a paid position.

Looking for someone to work closely with the festival coordinator with the specific role of managing the operational aspects of each venue including but not limited to: keys collections, catering, alcohol licencing, security etc. This is a paid position.

Liaises with venue coordinator, festival coordinator and bands. Must have a prior understanding and/or experience in working directly with musicians and stage coordination. Must be available to setup and pack down stages/backline.

Must be a people person and good with schedules and organising people. We’re looking for someone who is willing to be available throughout the Hullabaloo weekend to organise the volunteers at events.

This role entails liaising with the venue, key collection, sound and timely bump in and bump out of venues and general well being of teachers.

For more information about Hullabaloo 2019, go to our website at hulla.org. We’re very excited to present your Hullabaloo 2019 teaching line up: 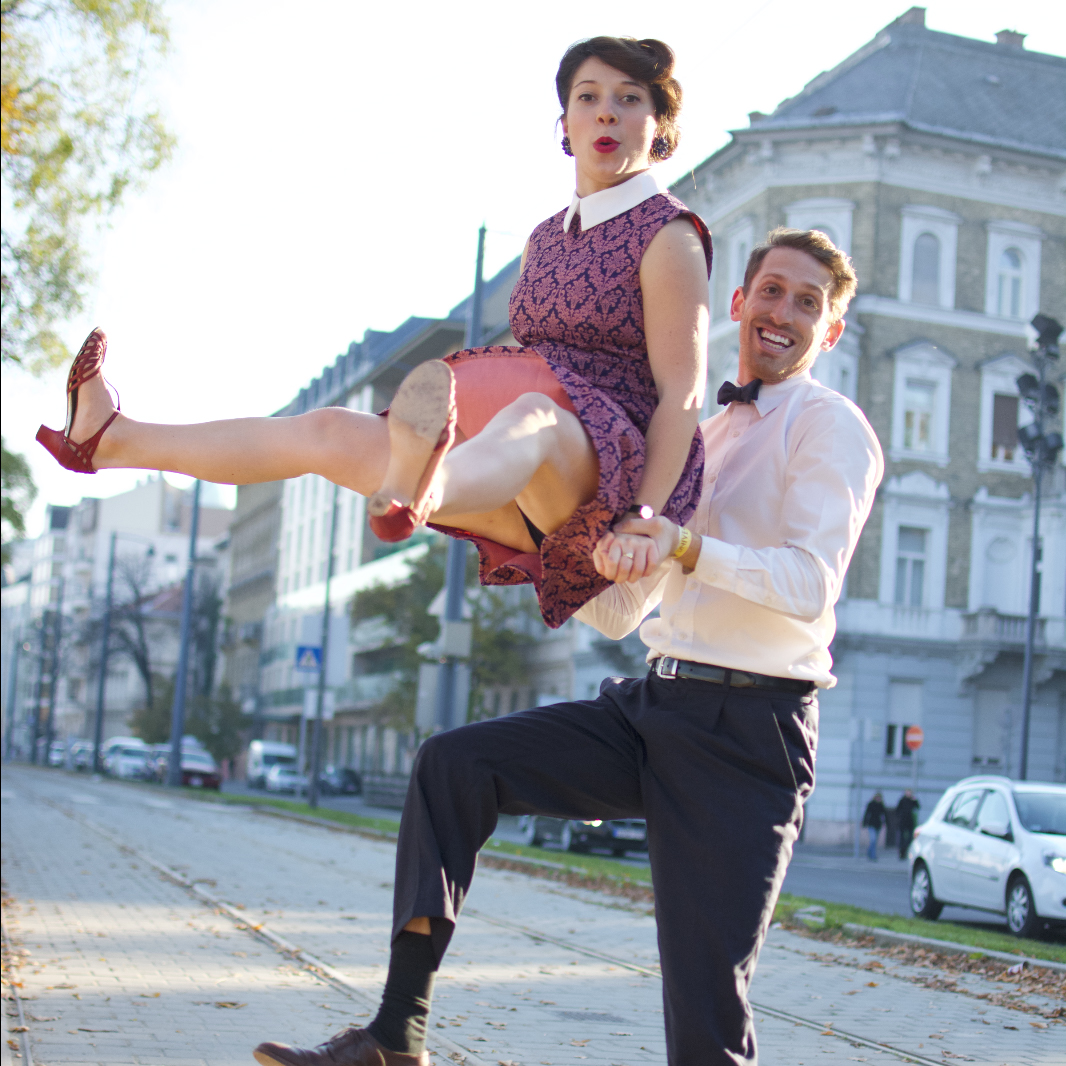 Elze and Peter are maybe just the right amount of crazy you’ve been looking for. She comes from Lithuania, while he comes from Los Angeles and together, they have this Euro-American style that’s all about fun and connectedness. Their musicality, playfulness and creativity are not just parts of their light-hearted personalities as dancers, but also as instructors. For them, Lindy Hop is much more than only leading and following… it’s dancing… trying to feel your partner… and in the meantime having a freaking great time! Their energy is contagious and their class material is stimulating. 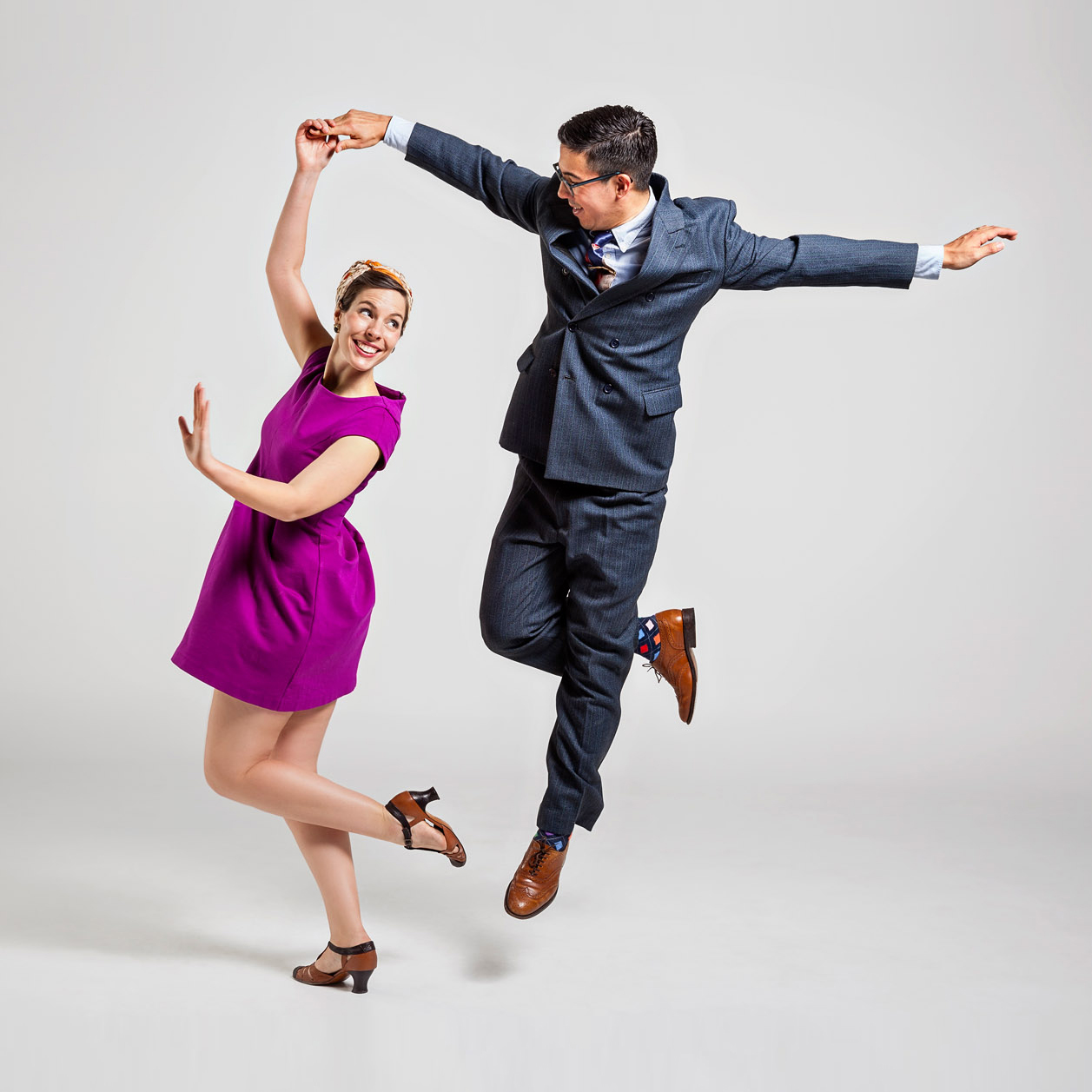 Heralding from Victoria both Georgia and Kieran are extraordinarily accomplished Australian dancers. Living, dancing and singing in Melbourne, Georgia is a talented vocalist and singing teacher with a bad lindy hop habit. While Kieran is a veteran of the Australian swing dancing scene with an enthusiasm and energy that is as inspiring as it is unpredictable.

Expect the ridiculous with these two incredible teachers who cherish the opportunity to take risks with new ideas while also being incredibly encouraging and practical in their teaching. JoYsS is a Jazz, Contemporary, Swing and Hip Hop professional dancer who also took acting classes at the school of art “la Comète” in Paris and is a multi-talented performer, choreographer, music producer and teacher.

In his classes he emphasises improving his students movements by teaching them how to better understand their own bodies which fosters coordination, balance and expression. All of which helps to improve a dancers musicality and capacity for improvisation – skills absolutely crucial for solo and partner dancing. 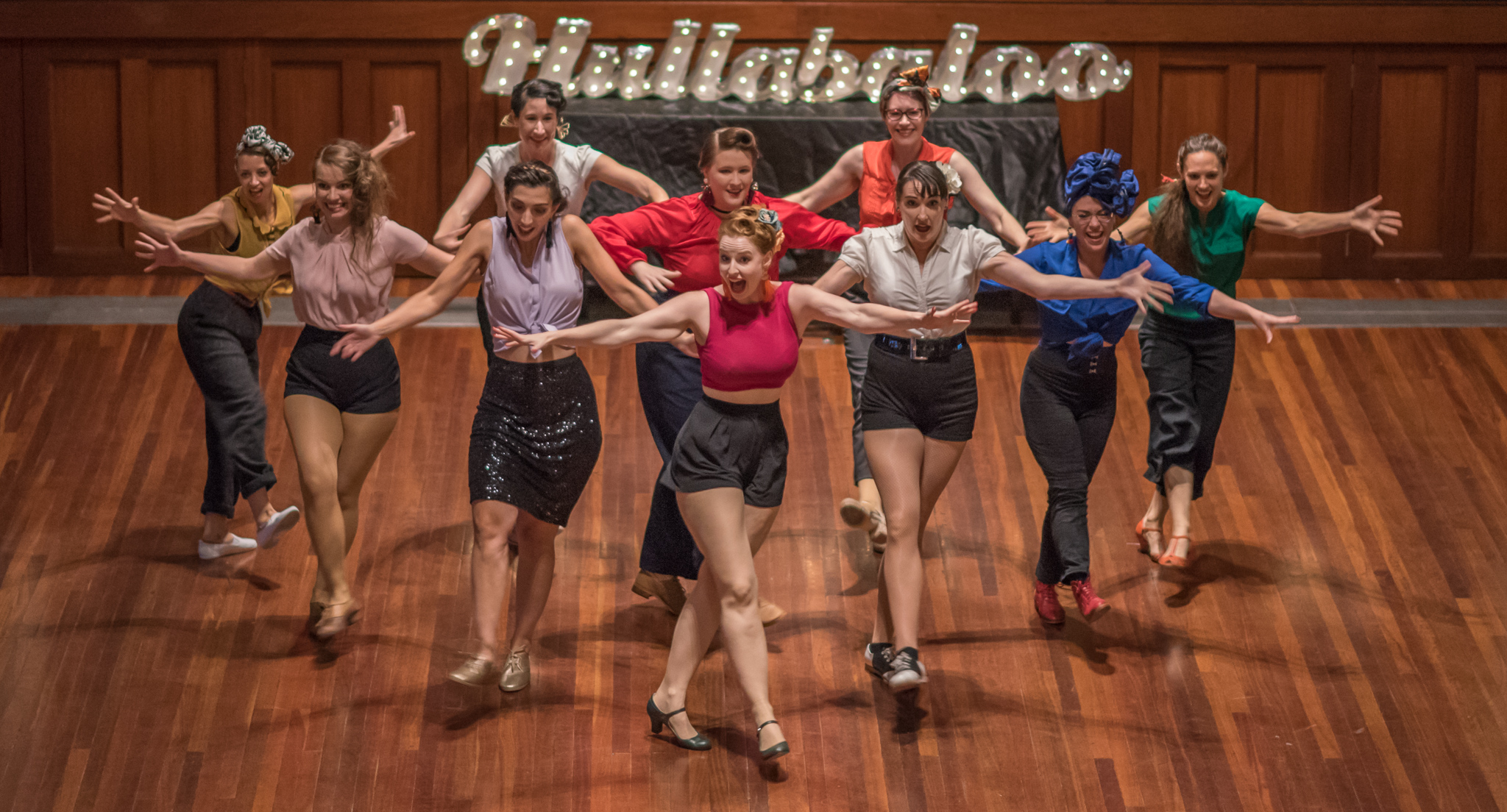 Hullabaloo is a celebration of all things swing dancing in Perth, Western Australia.

You may have heard on the grapevine that Hullabaloo is changing a little in 2019?… it sure is, but we guarantee our famous (and cheeky) Hulla spirit is alive and well, it’s just waiting to be unleashed once again! Hullabaloo is back for its 15th year! From Friday 20th to Monday 23rd of April, we’ve got four evenings of the liveliest live bands, swinging socials, sensational venues, and the latest late nights for all the dancing you can handle.

We wish to note that due to circumstances beyond our control we are not running workshops this year, which means there’s no need set your alarms for morning class – you can dance all night long.

We appreciate that this is a change to how Hullabaloo has run in the past, but hope that you are as excited as we are about an event jam-packed with all the high-quality socials you’ve come to expect. Our bands will be bringing the floors to life at the Mustang, the Hullabaloo Hop, the Ball, and our traditional Monday farewell, and our Friday, Saturday, and Sunday late nights will run until dawn for that quintessential Hulla experience of deliriously stumbling from the late night into bright sunshine.

We look forward to your continued support – see you on the dance floor this April! 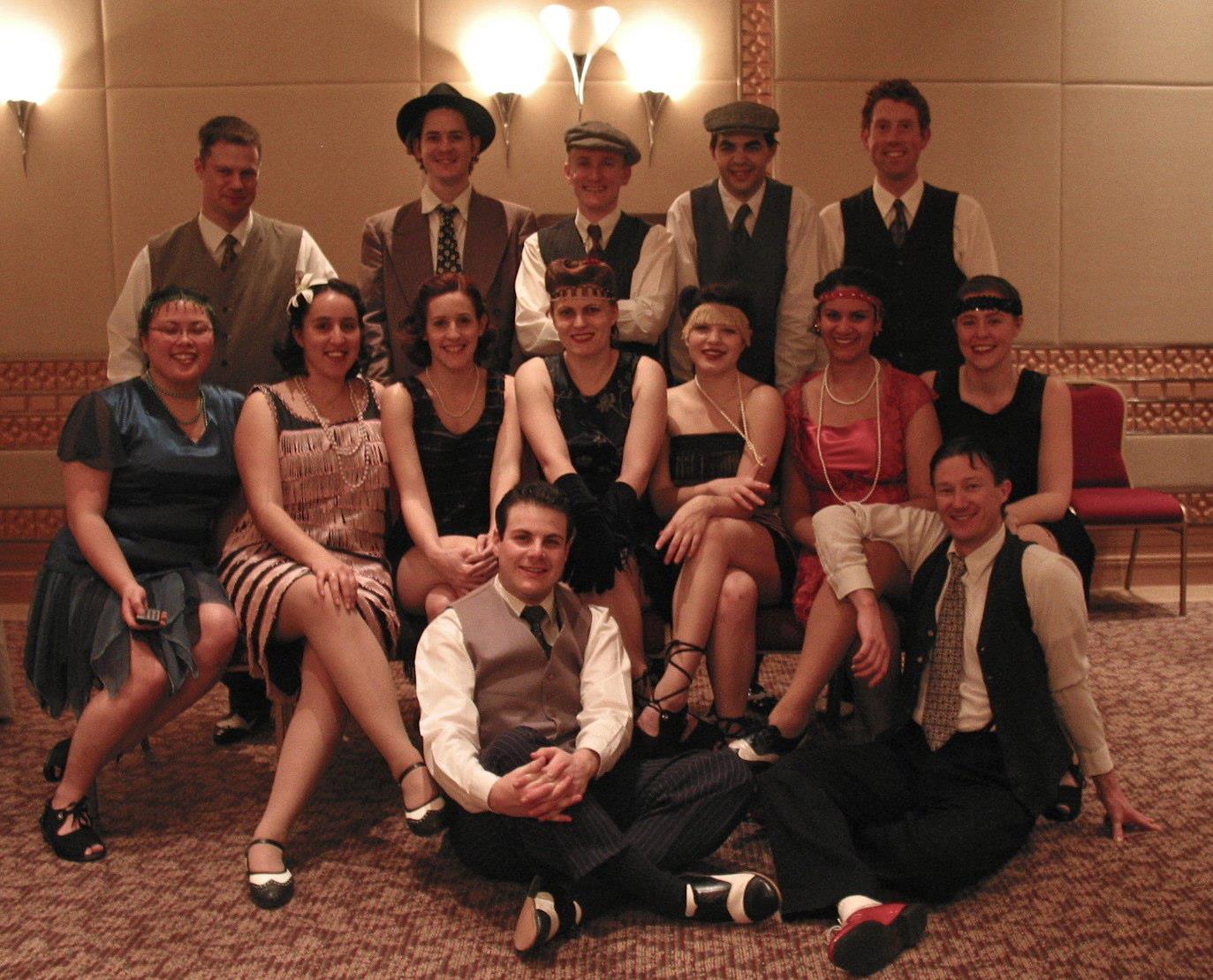 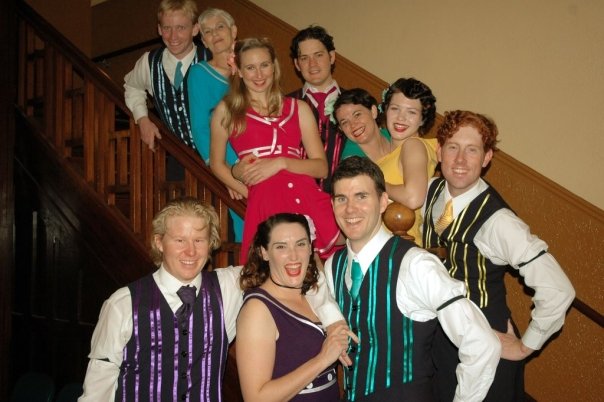 Presented by: Perth Swing Dance Society
Whilst Hullabaloo 2017 might now be a distant memory, we’re starting to look towards Hulla 2018.

This means we are after people to join the Committee, and come to meetings, and be a part of the planning, and form lifelong Stockholm-esque bonds with your fellow inmat… committee members. So if you want to come and be a committee member, we’d love that. But if you just don’t have that much to give, that’s okay too.

Jobs include (but not limited to) setting up and packing down events, helping at workshops, scouting & managing venues, coordinating supplies and getting everything from a to b to c, managing volunteers, hosting, registrations, secretarial jobs like note taking and document checking, researching and applying for grants, helping with DJs and bands, looking at marketing and promotions, and running individual events.

If there’s anything here that appeals to you, or if you have any questions, please feel free to have a chat to Amanda Giglia, Luke Rokich, Emily Clarke or Elida Solecio. You can also message the FB page, or drop us an email at hullainfo@gmail.com. Help us make Hulla 2018 as awesome as all the rest.